Europe is the “oldest” continent in terms of urbanization. Over the centuries this has caused a major problem with soil consumption. causing the loss of biodiversity, greater vulnerability to floods, landslides and extreme weather phenomena, reduction of forest areas with a consequent limitation of the natural capacity of carbon dioxide sequestration.

The unsustainability of the development model: SATURATION OF RESOURCES

The scientific evidence of the unsustainability of the development model, followed in the last two centuries, is increasingly consolidated both on an environmental and socio-economic level. 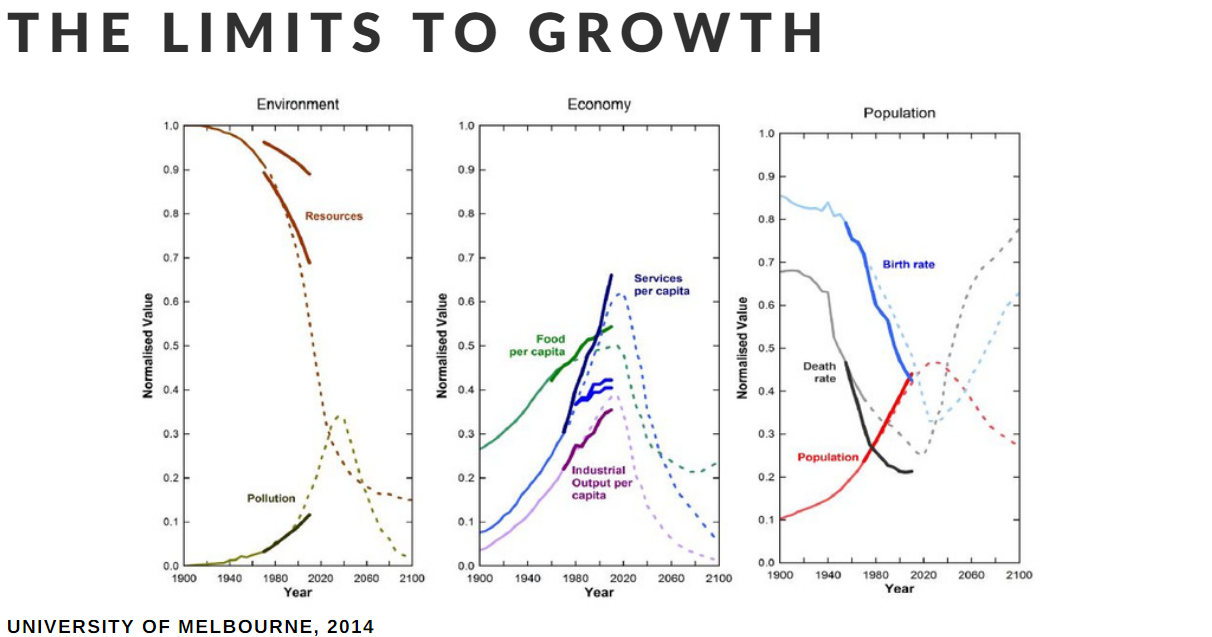 In the graph, with the dashed lines, we see the Scenario predicted in 1972 (dashed line) by some MIT experts compared with historical data from 1970 to 2010 (continuous line).

Data collected in more than forty years since the completion of the LTG limit to growth study indicate that the world is following the BAU (business as usual) scenario.
If the current rate of population growth and resource exploitation continues unaltered, the limits of development on this planet will be reached within this century. Reaching a sudden and uncontrollable decline in population and industrial capacity.

Some predictions have not come true, in fact, the saturation curves of some resources are shifted thanks to the advancement of technology. As in the case of oil, which, thanks to new extraction technologies, is still at the basis of the global economy (even if, according to forecasts, the global collapse is expected to occur before the end of oil reserves for various reasons, for example, because of costs and the increased difficulty of extraction).

Another saturation curve that the technology has managed to shift is that of food resources.

This is the Malthus chart. 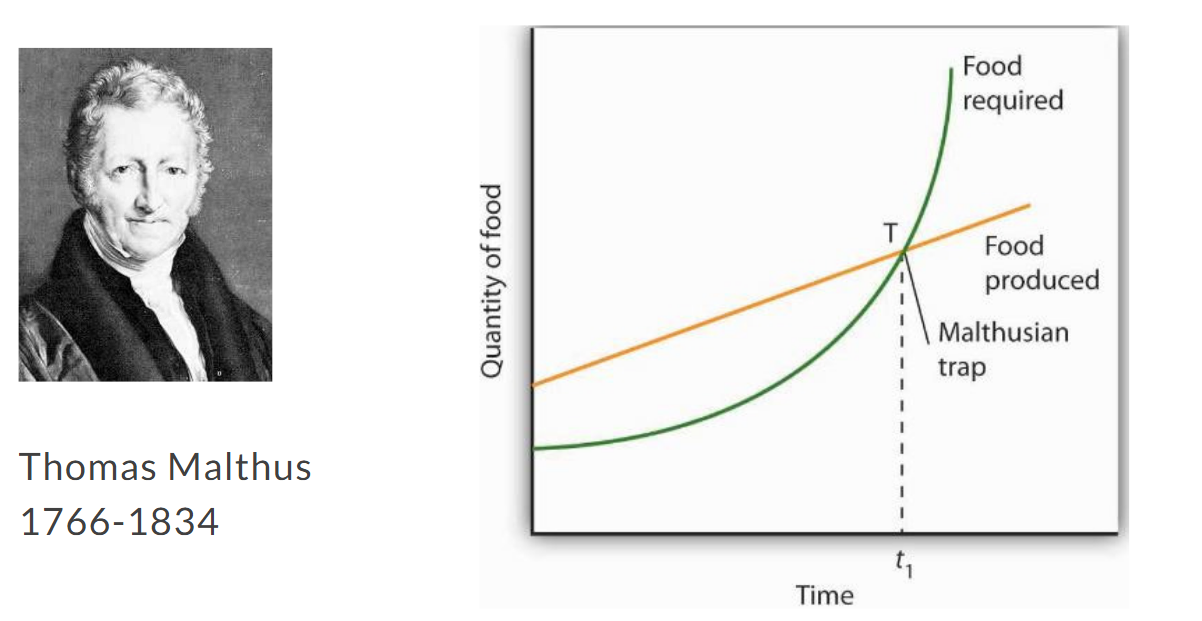 According to Malthus’ theory, at a time in human history a point in time when food resources would not be able to sustain the world’s population was reached.
However, he had not considered technological progress, in fact in 1944 the Rockefeller Foundation (together with the American Norman Borlaug, Nobel Peace Prize winner 1970) founded an Institute to increase the agricultural productivity of Mexican farms and started the Green Revolution. This made it possible to enormously increase crop productivity, thanks to the use of genetically selected plant varieties and a massive use of chemical fertilizers, plant protection products and pesticides.

According to FAO, the model of food production born after World War II is no longer sustainable because it does not solve the tragedy of hunger in the world (in 2017 there were still 815 million people at risk of death due to lack of food) and damages the environment.

Unsustainability is caused by agricultural systems that make intensive use of resources with excessive consumption and pollution of soil and water with negative consequences also for air quality and biodiversity.
Some data:

– 30,000 the number of edible plants known on planet earth, 7,000 the plants used in human history, 150 those we cultivate today, 30 those that represent 90% of our diet 3 represent 50% of the diet of all human beings. Growing food for sale on the market requires a high level of specialization in order to be competitive, and this limits and kills biodiversity.

-According to istat (Italian Institute of Statistic) in 2014 130,000 tons of plant protection products (fungicides insecticides and acaricides herbicides) are more than 2 kg per Italian pesticides.

-The “injection” of fossil fuels into the soil (such as agrochemicals and chemical fertilizers) has progressively depleted the agricultural soil of its essential capacity to regenerate itself. Over the last 40 years, 30% of arable land has become unproductive. 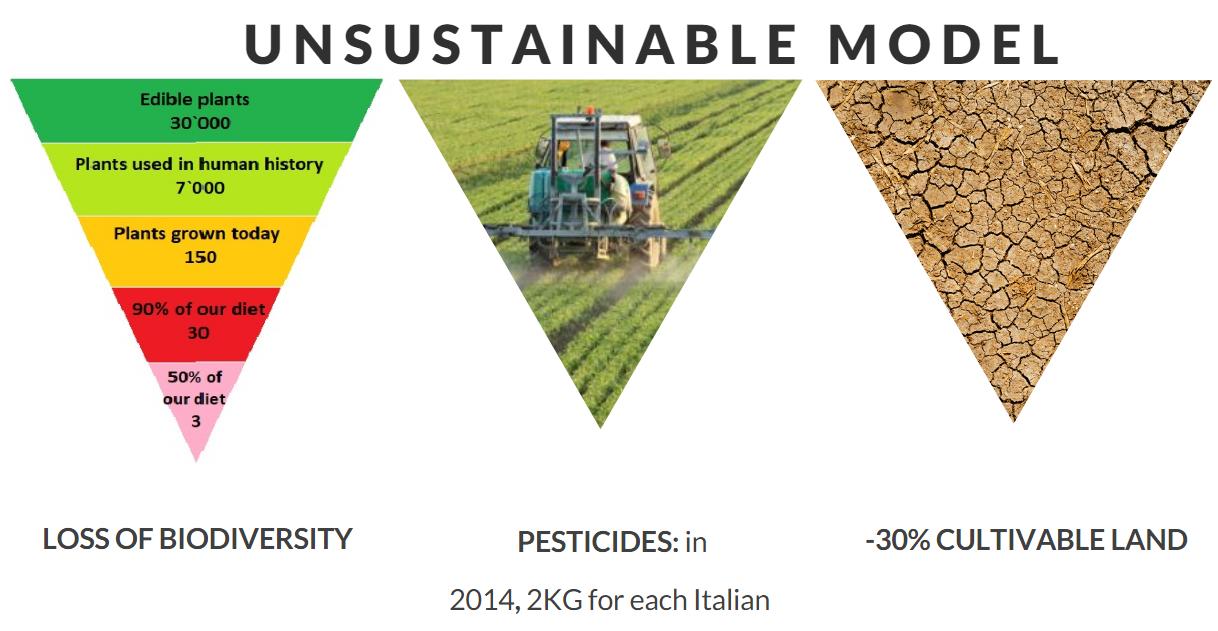 Today, thanks to the above-ground cultivation, we are experiencing what could be the second green revolution, but we need to base the analysis of two problems: carbon emissions and soil consumption.

1. CARBON EMISSIONS
In 2007 the number of city dwellers exceeded that of rural populations. Cities occupy only 3% of the earth’s surface, yet are responsible for 60-80% of energy consumption and 75% of carbon emissions.

As a result, cities will play a key role in the successful achievement of sustainable development goals.

One of the causes of high carbon emissions are food miles – the kilometers traveled to transport food to urban areas; and embodied energy – the amount of non-renewable energy needed to produce it.

It has been estimated that CO2 emissions linked to food production can be compared to those emitted by a machine or average low energy efficient home.


2. SOIL CONSUMPTION Every year in Europe, an area the size of Berlin of about 1000 km2 of agricultural or natural land is replaced by artificial infrastructure. The total area of European cities has increased by 78% compared to a population growth of only 33%.

It is for this reason that the European Community has set itself the objective of achieving zero net land consumption by 2050.

SOLUTION:
Faced with this scenario, and considering that food production (net of food used for biofuels) must increase by 70% to feed 10 billion people by 2050, the ReGenius Loci project studies methods for the integration of agriculture in cities to meet objective 11 “Making cities and human settlements inclusive, safe, sustainable and sustainable” to bring agriculture in cities through the use of out-of-town farming techniques.